The cultural heritage survey mapped the marks humans have left in the Finnish forests from the Stone Age until the 1960s. Over a period of six years, archaeologists documented more than 10,000 sites with 100,000 individual structures. As most of the areas had never before been surveyed, the project produced vast amounts of new information on the history of Finland.
Thousands of new sites from Stone Age dwellings to military history sites
With the cultural heritage survey, the number of fixed antiquities protected under the Antiquities Act in multiple-use forests nearly quadrupled from a thousand to some 4,000 in number. Hundreds of new Stone Age dwelling sites were discovered, the oldest of which were inhabited nearly 10,000 years ago. In Lapland, the oldest sites identified during the project moved back the earliest known period of inhabitation by up to a thousand years. Other documented sites included hunting pits, graves, holy sites and thousands of tar pits and charcoal pits.
The cultural heritage sites from later periods largely comprise crofts, forest rangers’ estates, log floating and logging cabins, tracks, farms, meadow barns and log floating structures dating back to the 1900s. While these have not fallen within the Antiquities Act, Metsähallitus has decided to protect them as a result of the survey. Since these wooden or stone structures are rapidly disintegrating, the survey was carried out in the nick of time. In addition to geographical location data, the project collected stories related to the sites, featuring characters from seers to bear hunters.
Exceptionally, the project also carried out systematic mapping and protection of sites of military history on government land, which were also about to be reclaimed by the forest. Some 2,000 Second World War sites were documented, comprising defensive structures, dugouts, trenches and emplacements used in the Winter War and the Continuation War. Crucially, the ‘dark heritage’, referring to the silenced history of the wars, was explored in Lapland and Kainuu regions especially.
Cultural heritage as part of silviculture
Metsähallitus planning officers and contractors now have new fieldwork guidelines that they can take to the sites. Personnel training was provided on site identification. Data and photographs on each site were saved in Metsähallitus’s information system where they are available to planning officers right from the silviculture planning stage.
The total project expenditure came to some four million euros, funded by the Forestry business. Cultural heritage surveys facilitate the sustainable use of Metsähallitus land. The cultural heritage sites will be used across a range of fields, from the development of tourism to teaching and research.

Captions:
Hunting pits were used in deer and elk hunting from the Stone Age up until the 1800s. Trainee Tuuli Taivalantti documenting a pit in Suomussalmi, Kainuu. Photo: Hanna Kelola-Mäkeläinen/Metsähallitus. 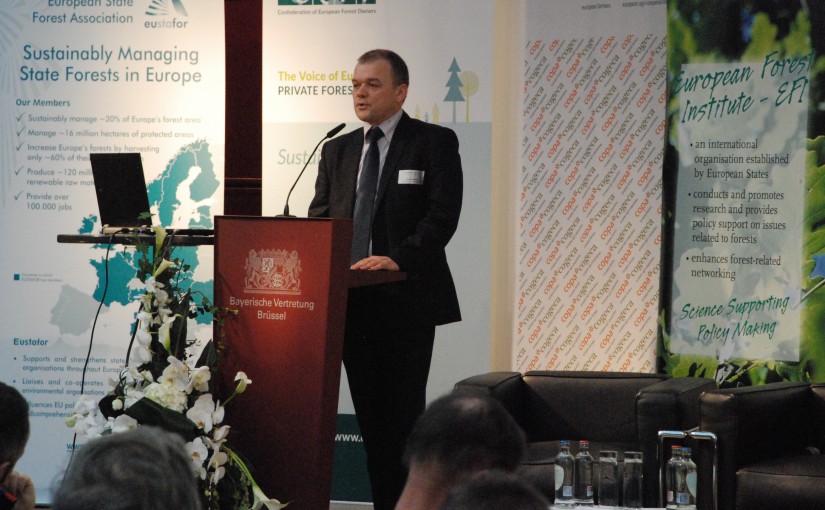 The European State Forest Association (EUSTAFOR) in cooperation with the ERIAFF Network, EFI, CEPF, COPA-COGECA, ERRIN, EUROMONTANA hosted the second edition of the workshop “Inform-Prioritize-Collaborate: Cooperation of Regions on Innovation in Forest Management, Use of Wood and Forest-Related Services.”

About 100 participants from countries all over Europe attended the workshop that took place on 29 January 2016 in the Representation of the Free State of Bavaria to the European Union in Brussels.

Based on the innovation challenges defined at the first workshop in 2014, this meeting aimed to support innovation in forest management and the use of wood and forest related services by offering a platform for the actors and stakeholders to present and exchange ideas.

EUSTAFOR’s Executive Director, Piotr Borkowski, welcomed the participants on behalf of EUSTAFOR and underlined the importance of innovation in a changing environment. European state forest management organizations support research and innovation both in silvicultural operations and new end uses for wood. This is seen as an essential investment which will allow us to both create and meet future growth in demands from society as well as industry.

Following the European Commission’s presentations of the European framework for innovation in forestry, the workshop focused on practical cases and project ideas from European Regions. Inspirational cases of Operational Groups of the European Innovation Partnerships on Agricultural Sustainability and Productivity (EIP AGRI) were presented by France, Italy, Norway and Spain. The cases showed practical ideas on tackling forest-related challenges through innovation and cross-sectoral collaboration.

During brokerage sessions participants had the opportunity to meet with many experts and regional actors to learn from other operational groups or to find partners for cooperation.

The event provided a good opportunity to bring together potential stakeholders to improve their project ideas and showed what the Regions are planning, or what they have already implemented, to inspire other territories to make use of available measures and to establish cross-border cooperation.
For more information about the workshop click here.